Seeing is Believing… And A First Step to Understanding!

To reach the stars, peek inside a cell or human body, or visit unknown continents and planets, our five senses and limitless imaginations have required some technical assistance. Since time immemorial, cosmologists, scientists, and navigators devised ingenious tools to allow us to access, visualize or listen in on the objects of our curiosity.  Tools and technologies that allow us to see into the brain have emerged from diverse fields: genetics, microscopy, molecular biology, radiology, electrophysiology.  This virtual museum will provide a snapshot on some inventions and inventors have decoded the mysteries of the brain. 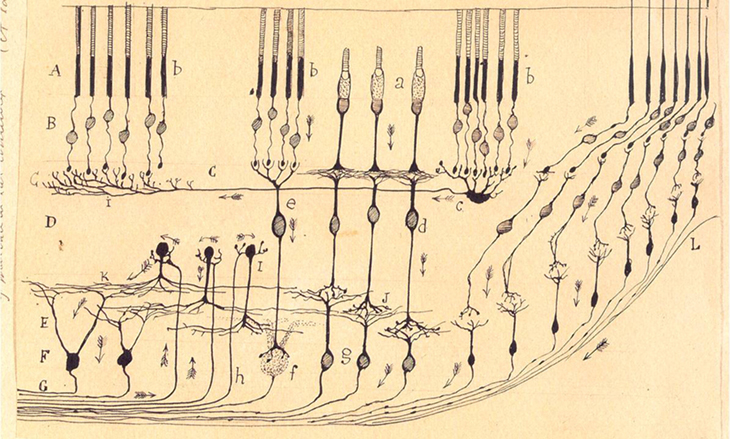 Since Van Leeuwenhoek introduced the first real microscope in the 17th century, successive enhancements in microscopy have enabled visualization of ever tinier processes in the natural world. Working in the late 19th Century, Camillo Golgi, in Italy, and Santiago Ramon y Cajal, in Spain, made the earliest contributions to visualizing the brain at a cellular level. They provided the first portraits of nerve cells and their components, for which they shared a Nobel prize in 1906. The image to the left, one of hundred of gorgeous, finely detailed drawings of neuroanatomy by Santiago Ramon y Cajal represents cells in the retina.  An archive of Ramon y Cajal’s drawings can be explored here, and a summary of his life and work is here. 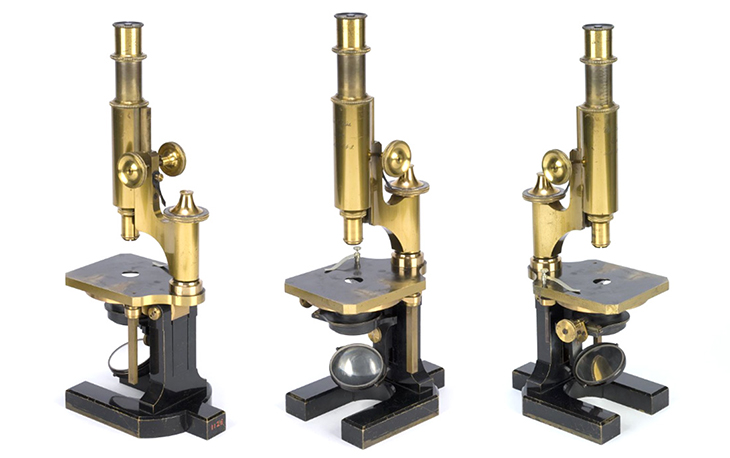 This microscope is similar to one that was awarded to Santiago Ramon y Cajal in 1885 by the Provincial Government of Zaragoza for his dedicated work during a cholera epidemic. This particular one was owned by Harold C. Ernst, M.D., first bacteriologist in the United States. A letter from Carl Zeiss himself to Harold Ernst in 1885 promises that this order from the factory would be expedited. Dr. Ernst worked at the time with Robert Koch (known for his groundbreaking research on tuberculosis), and this was probably the reason for this extra attention.

Light microscopes use a range of visible light to illuminate and magnify specimens. A well-known type of light microscope is a compound microscope, which is an instrument that has more than one lens and uses light to transmit images to the eye. At Harvard, both the Center for Brain Science (CBS) and the Nikon Imaging Center (NIC) at Harvard Medical School have light microscopy core facilities.

The confocal microscope, uses isolation methods to prevent the “haze” around a sample that is caused by most light microscopes. It took the enhanced resolution of a confocal microscope to adequately scrutinize Golgi-stained brain cells. The principle of confocal imaging was patented in 1957 by Marvin Minsky (BA Harvard ’49). Minsky, a renowned cognitive scientist, was a polymath with accomplishments across several disciplines. He designed and built some of the first visual scanners and mechanical hands with tactile sensors, advances that influenced modern robotics. In 1951, he built the first randomly wired neural network learning machine, which he called Snarc. In 1956, he invented and built the first confocal scanning microscope, an optical instrument with superior resolution and image quality still in wide use in the biological sciences. A pioneer in the field of artificial intelligence, he co-founded the Artificial Intelligence Laboratory at MIT.

Harvard researchers have contributed mightily to the advancement of imaging technologies, and many examples are on display across the campus.

The Future of Imaging Is Here

Today, among the most cutting edge of imaging technologies is STORM, a form of super-resolution light microscopy. The technology allows fluorescent probes to separate overlapping regions of individual molecules so that their positions can be more clearly determined. STORM has allowed researchers, to create three-dimensional fluorescence images of cells and tissues. It is among the most advanced microscopy technologies in the scientific community today.

Optogenetics, as the name indicates, derives techniques from the fields of optics and genetics, to genetically modify neurons, allowing researchers to control and observe their activities in living tissue. The CoLBeRT technique developed in the Samuel Lab in the Center for Brain Science, is amusingly described on their website.  In the Cohen Lab , Optogenetics and other physical tools are deployed in creative ways to probe biological structures.